Betterbird is a fine-tuned version of Mozilla Thunderbird, Thunderbird on steroids, if you will.

Betterbird is better than Thunderbird in three ways: It contains new features exclusive to Betterbird, it contains bug fixes exclusive to Betterbird and it contains fixes that Thunderbird may ship at a later stage. Please refer to this feature table for examples. This should give you an impression of where the project is headed. More information on why we're doing the project can be found at the FAQ. Or just see our ilustrator's impression:

Which party would you join?

Today we are shipping Betterbird version 102.7.1-bb29. Please refer to the release notes for details. German, Dutch, French, Spanish, Italian, Portuguese, Japanese and Chinese localisations available, other languages on request. A portable version for Windows is also available. There's also a Mac build in English only, which can be localised using Betterbird language packs.

As of 20th September, the 91 series of Betterbird has reached "end of life" status and will no longer receive updates. Please switch to Betterbird 102.

The good news is that System Tray support for Linux

and the Insert menu were already included in release 102.7.0. Regular expressions in search terms/filters followed in release 102.7.1. Account Colours can only be implemented after Thunderbird replaces the thread pane (message list) XUL tree with a JavaScript solution.

Based on the current situation in version 102, a look at quality assurance, or lack thereof, is appropriate. Thunderbird has never had an organised quality assurance team, they let the product ripen at the customer site, at worst causing data loss like for version 102. The 102 release with mbox and MSF corruption causing data loss and deleted MSF files was nothing short of disastrous.

More and more developers are hired who contribute more and more changes causing an ever growing number of regressions (Wikipedia: A software regression is a type of software bug where a feature that has worked before stops working). The team tracks bugs found in early deployment of a release, and the trend is astounding: Version 68: 43, Version 78: 185, Version 91: 270, Version 102: 384 (22 August 2022) and counting. 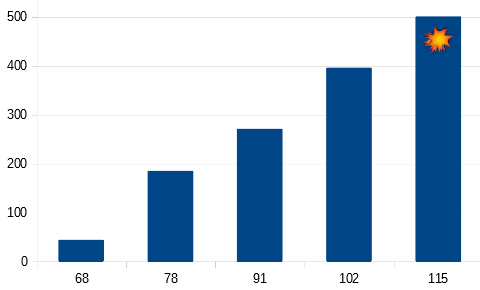 Thunderbird management has discussed establishing a QA team since 2020, but in the end, funds were spent on hiring more developers. In this context, this article seems to mark the beginning of a new era. But will Thunderbird finally catch up with quality and usability issues? Our project leader wrote an answer.

Want to see Betterbird running on a mobile ARM64 device (Samsung Galaxy Tab S7), click here. Note: That's the work of a volunteer, not strictly related to the Betterbird project.

For the much requested multi-line view, see here for details.

The red-orange colour scheme is part of the registered trademark. Red-orange together with a Phoenix-like bird on one hand signify a more aggressive policy and on the other hand a resurrection from the ashes unleashing the potential of the product while not being bogged down by annoying bugs.

We've had many requests to change the icons to make them better distinguishable from Firefox to avoid mis-clicks. As the colour scheme is part of the trademark, this is unlikely to happen.

Due to the current situation in Europe, we were featuring the Betterbird logo at this website in Ukrainian colours from March to July 2022. This has now be replaced by a ribbon of solidarity.

If you want to make your own custom icons, download the green logo or the one in Ukrainian colours:

Betterbird elsewhere on the web

Examples of Betterbird being better in version 102.7.1-bb29

Of course the Thunderbird team is busily adding a whole bunch of much welcomed new stuff and improvements, but making sure that everything remains in working order falls by the wayside. Thunderbird is shipped with unnecessary regressions, so things that used to work stopped working.
Best example: 91.3.2 shipped with broken Calendar printing 😩
(*) We supply our changes to Thunderbird, but it is unclear if/when "upstream" will accept them.